As the oldest continuously run rally in North America, the Press On Regardless Rally (POR) has been held on the roads of both of Michigan’s peninsulas since 1949. This year, its 72nd running will start on Saturday, September 12, and will end in the wee hours of Sunday, September 13. Andrew Layton has written a terrific book on the history of the rally, titled Press On Regardless: The Story of America’s Oldest, Longest, and Meanest Road Rally. We recently caught up with Layton to learn more about this rally and its amazing story.

Read the full article on Hagerty.com:

I ran in the POR in about 1964 or '65 in an unmodified 1959 SAAB 93B.  We wiped out part of the exhaust, etc. along the way and, finally, couldn't make a 90 degree left turn on a wet dirt downgrade in the northern part of the Lower Peninsula of Michigan.  We slid into the woods, but no damage to driver and navagator  - the car was totaled.  It was towed away and the local sheriff gave us a ticket for damaging his woods!  When we drove back from Detroit weeks later to pick up the wreckage and pay the fine, the Justice of the Peace commented that he'd never expected me to come back and pay the fine, but didn't waive any of it!

I can't remember the year, but Jon Davis, owner of the Library Bar in downtown Houghton, MI, won the overall event in a stock class Saab.  He was a hell of a driver.

I remember hearing about the already-legendary POR from a couple of fraternity brothers around 1967 or '8.  They were more into cars than I was, but their enthusiasm for the epic-ness of the rally remains with me today.  Alas, none of us ever got to attend (never mind compete in) any but small local rallies and gymkhanas.

During the early '80s high point for Car and Driver, Csaba Csere - eventually the editor of C&D - had a navigator ride in POR. The write-up is a C&D classic and reveals much about the rally life. Just to finish is an accomplishment... Winning? If it was me it's the first thing I'd mention each and every day.

Is this a tests of speed; or a test of skill and precision?

“Many of those roads were designed for speed limits of 25 mph,” points out Layton. “And were now seeing speeds well above 100 mph.”

“The event is not a car-breaker,”

The current event is not designed as a car breaker. The TSD format limits the speed by route instructions. In the 70's and 80's, the opposite was true. Speeds were limited by road choice. The worse the road the better. I've attended PORs were less than 25% of entrants finished. I never did. Truly bragging rights then.

I'm intrigued by the picture of Scott Harvey in what appears to be a '64 - '66 Mopar A body, either a Valiant of Barracuda with a 4 speed transmission. That seems to me like a unique choice for rally racing.

Check this out for more of Scott Harvey & Ralph Beckman in their Barracuda https://www.youtube.com/watch?v=4-uqhn8awm0&t=28s 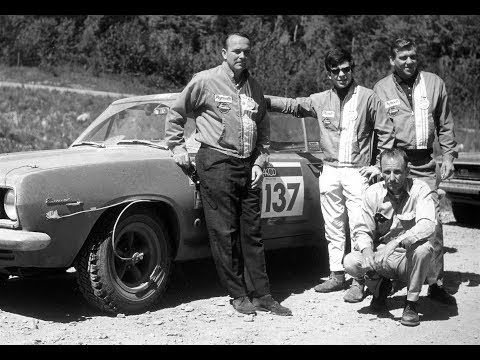 I ran POR in my MGB in the 90s (along with Eric Jones/Bill Potvin in Eric's MGB, and the Kirby Bros. in their Midget (!).  It was then termed a "brisk TSD."  At that time CAS' seemed to be near or at the official speed limit, and most of the roads were unpaved rural roads throughout the northern LP between Alma and Traverse City, so it required alert driving as well as a tolerant and skilled navvy.  Not really car-breaking, but it also wasn't hard to break the car.  I've not been in that area for two decades, but have been told it's becoming fairly developed.  I've wondered how POR has changed in the face of more people, more development, and an increasing aversion to risk tolerance.