As we honor our veterans, check out this 1943 Sherman tank up for auction

When it comes to patriotism and sacrifice, every military veteran deserves our gratitude, no matter how large or small their role in protecting our freedom. Suffice it to say, as we prepare to celebrate Veterans Day on November 11, this particular service member’s contribution was bigger than most.

A 1943 M4A1 Sherman tank—one of fewer than 20 known-running M4A1s, according to the seller—is up for auction on Bring a Trailer. The World War II hero has already been bid to $300,000 with nine days left in the auction. Equally impressive: the auction has more than 3000 watchers and hundreds of comments, ranging from celebratory and humorous to awestruck, nostalgic, and somber.

Read the full article on Hagerty.com:

The drive sprockets and track look unusual, not your standard Sherman units. I seem to recall reading the Montreal Locomotive works built some tanks with a single pin track, that would jive with the comment this tank served with Canadian forces. Not sure if these versions ever saw use in combat.

The Sherman was a death trap, since the German tanks were bigger and had the 88 gun, our advantage was sheer numbers, which they couldn't begin to match.  When the M-10 tank destroyers were brought into battle the whole story changed, a very light and fast machine with a big gun and powerful shells, they ultimately overcame the Germans, could blow the big Panzer's to pieces with one blow.

That argument that it was a death trap doesn’t hold a lot of water with WWII historians anymore. Yes, the Germans had superior guns available to them, but not every tank in the Wehrmacht was equipped with the 88mm. Much like the M1 Garand’s ping getting soldiers killed, evidence suggests that the complainants are exaggerated. This video offers some good, fact based points in favor of the Sherman. 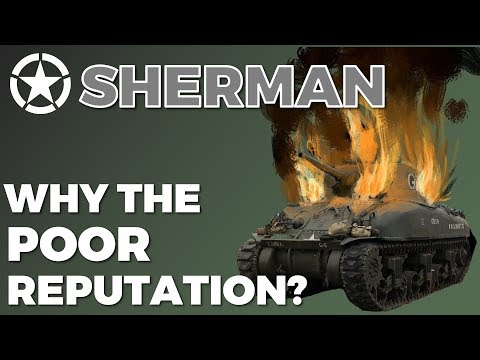 I have been a military historian of a WWII US infantry division and its attached units for 35+ years.  My uncle was a tank platoon sergeant in the independent tank battalion attached to that division, the 702nd Tank Battalion "Red Devils".  My uncle was killed in action at the Moselle River in France.  I tracked down 345 living men from the Red Devils when I was writing the first volume of my five volume book.  I became great friends with all those men.  Sadly, they are all gone now.  I could spend months telling you stories of what life was like for these men.  They spent nine solid months on the front lines of Patton's Third US Army without any break; just nine months of day-in, day-out killing, dying, sweating and freezing, going months without bathing and living on bad food that gave them dysentery.  But they were all damned proud Americans who helped free the world from a great evil, and they would have been proud to do it all over again if asked.  I have encountered many famous people, but it was the greatest honor of my life to know these forgotten men, call them my friend, and be accepted among them as one of their own. May God rest all their souls!

The added armor under the hull star was placed there because the Germans used the star as an aiming point to take out the driver and machine gunner. The Israelis upped the armor all over, upgraded power packs and added larger guns on the ones they acquired. Power packs ranged from the radials to twin Cadillac v8s and 5 Chrysler flat head sixes in a star formation.

No, the added armor was not put there because of the location of the star. The early Shermans had ammo stowage in the sponsons, a hit there could cause a fire or catastrophic detonation. So as these early models were upgraded, additional armor was added to protect the ammo bins. Later models had the ammo stowage moved to the floor with a non flammable liquid surrounding the shells. The stars being used as aiming points was indeed considered a problem, and most units in the ETO painted them out. The notion that the Sherman was a “death trap” have been pretty much put to rest, the loss/kill ratios and casualty rates for it’s crews just don’t support that label. I suggest reading books by Steven Zaloga, or an on line presentation by Major Nicholas Moran on “Why the Sherman was what it was” if you really want to delve into this topic.

My father served in the Ohio National Guard in the 50’s. He was a Sherm driver and found out fast they were death traps.

Shermans started out as a good tank but their armor was light and shells would get in and just bounce around inside killing all.

The Korean War was on and the last place he wanted to be was a Sherman. So he I listed in the Air Force and ended up plowing snow for them at air bases in Germany. While not under fire there was a lot of hostilities with the Russians.

He told me had he been sent to Korea in a Sherman odds were good I would not be here.

Actor James Garner served in a Sherman in Korea. He was injured and nearly died. His tank was hit and it nearly dislocated most of his bones and is part of the reason he had many health issues as he got older.

Note in the movie Tank he drove a Sherman because he knew how.