9 automotive ad campaigns that either sizzled or fizzled

The new car business is incredibly competitive. There are a dozen or more companies all vying for customer dollars, doing their best to build a compelling product. Even if a company were to build the perfect vehicle for a buyer, marketing is how the message gets out. To make that connection, advertisers have come up with all sorts of outlandish gimmicks, pitches, and commercials.

As we'll elucidate in this highly scientific study, sometimes great commercials can lend new life to a model or help establish the identity of a brand. Others, well, can become punchlines.

"Real people" reminds me of: "Toyota, grounded to the ground"  LOL!! So serious, so ridiculous!

Vintage DDB Volkswagen ads are the gold standard of advertising.

How about the “Youngmobiles” campaign, or the “It’s not your fathers Oldsmobile”.

You could do an entire blog just on Volkswagen ads for the original Beetle.

Those BMW films, while not “commercials”, imo are the best car ads ever.

Tim
Technician
My friend and I actually hosted a short film night where we showed all of the BMW films along with some comedy shorts.
0 Likes
Reply

The fuzzy tiger tails dangling from rear view mirrors are not from a Pontiac promotion,  they are from Esso's "put a tiger in your tank " promotional campaign.

The Real People ads are without a doubt the worst. It makes me change the channel.

Strange, I only remember the GTO tiger in your tank ESSO commercial and the Hertz OJ Simpson.

What's the measure of determining if the ad campaign sizzled or fizzled? Success of the brand? Brand Awareness? Duration of the ad campaign? The Mustang had quite a memorable ad campaign, but it was very short, and the car was a huge seller that has lasted for over 50 years, but do people remember the ad with the galloping horses? I doubt it, so I think there has to be a combination of people having a positive memory, the duration of the campaign, and an increase in sales at the time, so I think any best ad campaign list has to include Volkswagen in the 60's and the Toyota "I love what you do for me" ads in the 80's.

I went in to an Oldsmobile/Cadillac Dealership one time to look at a car. I saw a Catera and a cutlass supreme parked side by side in the show room. I told the salesman that they look a lot a like and you want thousands more for the Catera. When I went back a week later the cars were parked on either side of the showroom, lol.

What about the Subaru dogs? They were some of the coolest car commercials of all time!

Wanna know a failure in the making?! The big push for the new Ford Bronco! Too much Too soon. By the time this vehicle debuts it will have lost the fire of its marketing surge.

Brandan
Hagerty Employee
Time will tell, but it seems that people are still eager to buy them. The real test will be keeping demand up over several years.
0 Likes
Reply

To help reduce the confusion over the tigers used by ESSO and Pontiac I offer the following;

Best I can tell is that the ESSO 'Tiger in Your Tank' ad campaign started in 1959 with a cartoon tiger - I cannot find where they ever used a tiger tail as an advertising gimmick. But it would have been a good idea to have a furry tail hanging from the gas filler.

The Pontiac Tiger campaign started in 1964 and continued through 1967 (?).  The following link has photos of a couple of suitably striped Pontiac GTO's with a tiger tail coming out of the trunk,  https://www.pontiacv8.com/blog/2019/9/8/pontiacs-tiger-themed-marketing-campaign-when-did-it-start

Loved Joe Isuzu, was funny before ads went out of their way to try and be funny. Thanks for including him.

Gopher_Baroque
Intermediate Driver
Ha, I still brag about the genuine corinthian vinyl in my car but suspect nobody remembers the reference (except zmega).
4 Likes
Reply

Does anybody remember the 1980 Chevy Citation commercials that were running during the NFL playoffs back in December 1978. I was a kid then. I couldn't understand how they were selling cars 2 years into the future. I still can't get that jingle out of my mind.

I guess if nobody remembers that, it was a huge flop.

I think the one I remember the most is the roadrunner always outsmarting Wil E Coyote in the ads for Plymouth's Roadrunner.

Does it have a Hemi?  Why is this not on the list? Hillbillies have feelings. Where is the love man?

Something that has always bugged me about the Crocodile Dundee Subaru ads.

Their tag line was Dundee spouting

Sounds cool, but if something is first, it will always be first.

Can you imagine a Ford ad that says

Chevy's "real people" ad is a master's class in how to deflate excitement about your brand while simultaneously running off people already your customers. They've managed to make the company that has the Corvette and Camaro ZL1 more boring than Honda.

Loved the Joe Isuzu ads, and they were in enough print, radio and TV ads that if they didn't work it was because of the product. Joe Edsel ads probably would have been a failure, also.

What????? No mention of DDB's VW Beetle campaign? The drivel mentioned in the article above is light years below the brilliance of VW's ads of the fifties and sixties. The style developed by DDB, which included the "Think Small" and "Lemon" ads has been judged the absolute best campaign of the twentieth century. These ads had to be good to sell to US buyers an archaic-design car made by our mortal enemies of WWII. And, they did sell cars -- the campaign's momentum took US Beetle sales to 390,000 cars by 1968.

For creativity, none of these campaigns in the article matches Ned Jordan's ads for his cars. Of particular note is "Somewhere West of Laramie". 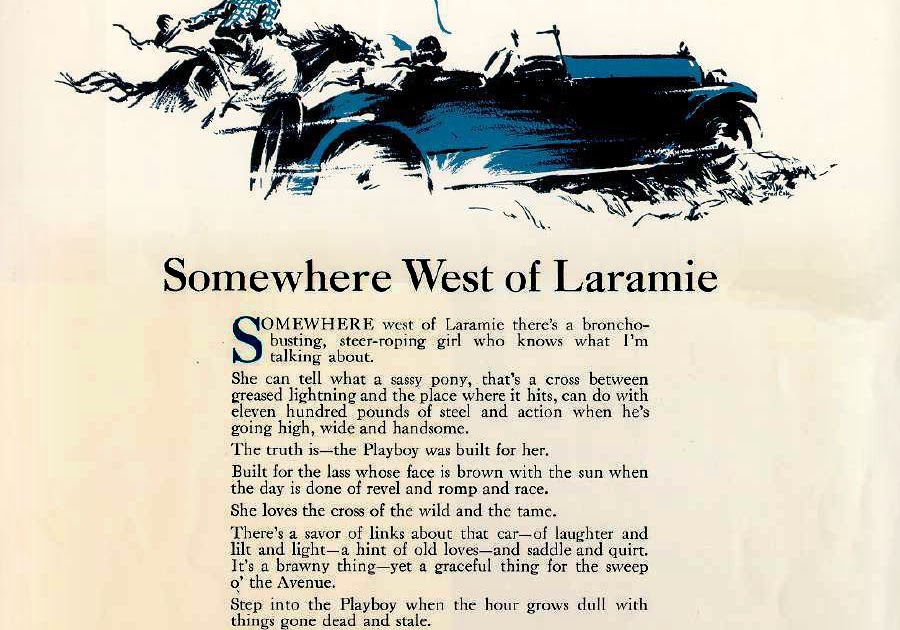 If the cars had been better (they were "assembled" cars, with no great claims to fame in technology, performance or style),  and Jordan had been as good at managing as copy writing,  perhaps the cars would have been more successful.

You forgot the Kia Hamsters!

The Triumph TR7 launched with "The shape of things to come".  It must have worked, they sold over 100K of them in 7 years.

Later 60s Mercury Cougar commercials which aired on NHL hockey TV were interesting to me as an early term.

Helpful Honda Guys commercials: a few years back they had one where they gave someone who was getting their older Honda serviced a brand new Civic. The next commercial they gave people who were at a laundromat...rolls of quarters. I always felt bad for those people waiting for their clothes to dry  who may have seen the other commercial and got all excited when the guy walked up and said "Hi, we're the Helpful Honda Guys!"

The license plate on my 1986 Trooper II was JOESUZU (pronounced Joe-Isuzu).  I got lots of comments on the plate,  The Trooper was a great car/truck, finally had to give it up when it became a money pit.

BroncoJoe
New Driver
I had Joisuzu on my Vehicross! It was perfect
1 Like
Reply

I worked at Leo Burnett during the "This is not your father's Oldsmobile" campaign.  The general consensus was that if the cars were as good as the commercials, they wouldn't have dropped sales by 50% during the campaign.  Downsizing, gutless I4s and V6s, front wheel drive.  Then of course, the admonished and insulted "Fathers" leaving Olds for a V8, full sized, RWD Infinity and Lexus.

So, does that mean Actors are not real people?

You don't have to be an actor to be prompted to say whatever is on the script.

I really don't see a reason the "real people" ad made this, or any list. Its more of a insult to any car person and certainly an embarrassment to the human race. Are people THAT stupid? Really? They really make stupid comments like that when looking at a car?

I remember the initial Infiniti commercials of 1989...Geese...Water...Guy talking about houses...

WillieG12
Pit Crew
Only remembered by folks of a certain age, the slogan/song was known by every potential customer in America. It developed what us lawyers calls, "secondary meaning" in the culture. References to "just" "see the USA" conjured the Chevy name. That version of the Dinah Shore show was top 10 in the ratings for years. More eyeballs watched that show on any given week than watch the 5 highest rated shows on TV in 2020 COMBINED. Chevy sponsored the show, the sign was on the curtain and every show included the song at least once.
1 Like
Reply

Two come to mind. The first is *very* old (like '70s). When the Pontiac "Judge" came out, laugh-in was on TV so of course there were some pretty lame commercials exploiting "here come da judge" type stuff, but the most ludicrous was the rubber front on the grill, where they would hit it with a sledge hammer to show how "indestructible" it was.

Of course some bright light figured what worked on TV would work in the showroom. Where I grew up, that lasted about a week, until one spatially challenged customer managed to sledge-hammer THRU the grill to the tune of several hundred dollars damage. (put an end to the local campaign real quick).

The second disaster was Celine Dion attempting to sell a particularly super-expensive  Chrysler behemouth (the 300???) as a "mom's car". That was during her Vegas years but I can't recall much else about those commercials except they didn't last a month.

Best ever was the NZ Toyota ad (now banned). But you can still find it on Youtube.

I would include AMC's advert with the guy refusing a drag race with some other driver claiming he had a gold fish bowl in the front seat.

One of the greatest was Like A Rock for Chevy Trucks. That one sold a ton of trucks and people today can not hear Bob Seger singing like a Rock and not think of pick up trucks.

The other most will not recall is the Penalty of Leadership Cadillac ad from 1916 in the Saturday Evening Post.

How old is the person that wrote this article?  Aren't the Tiger tails referenced above from "put a Tiger in your tank" gasoline ads?

Brandan
Hagerty Employee
The writer is old enough to own a 1964 Pontiac LeMans with an Esso "Put a Tiger in Your Tank" keychain, but it's the GTOs that have held onto the tiger tails more than any other car I've seen at car shows.
2 Likes
Reply