In the car universe, some collectibles are reliably magnetic. Wheel up to a concours, Sunday’s cars and coffee, or any other gearhead gathering in an early Sting Ray, an E-Type, or a vintage “patina pickup” and you’ll immediately find appreciation and friendship thanks to your ride.

Well, motorcycling hosts the same dynamic. In between heavies like Vincents and innumerable small-displacement Japanese bikes exists a nice selection of blue chips that are affordable, fun to ride, and beautiful—and they will always pass peer review among real bike folk. Here are three favorites you can typically find in ridable condition for $6000 or less. Read the full article on Hagerty.com:

these illustrations are fantastic. what a neat touch!

The CB750 was the first super bike and first production 4 cylinder. It decimated the competition. And it didn’t leak oil like it’s British counterparts and was super reliable. Knowing how long the CB750 was in production for, Honda got it right the first time.
The BMW toasters were only one year - 1972 and were widely panned by the BMW community upon release.
Having owned both bikes, they are fun to ride, own, and work on. Syncing all 4 carbs on the Honda can be tricky, but manageable.

I agree, the renderings are awesome!  I'd love to have an old Honda to putter around the neighborhood on.  Great to looks at and takes up the space of a lawnmower and seed spreader in the garage.

You know Lucas did the electrics on those Brit bikes. Do you remember the Lucas nickname?

Many manufacturers developed 4 cylinder motorcycles before Honda & when Kawasaki came out with their 900 Z-1 in 1973, they gave up & stopped production the following year. I just wish I still had my old 1949 Indian Scout again but then, maybe that's why I have a bad right knee today.

My favorite was the Suzuki GT750 2 stroke triple. Was bulletproof, toured with the best of them and could snap your head back when you cracked the throttle like only a 2 stroke could.

KickStart
Pit Crew
And you would always either ride alone or at the back of the pack. Even the most efficient oil mixing will never eliminate the smoke that trails the bike. My Dad rode a Zuke T500 for years and I was his passenger. I can still remember the T500 lifting the front wheel in any gear when it was gunned, even flying down the freeway. When our rides got a lot longer, he changed out to a Honda 4 cylinder 4 stroke (chopper). When I started riding my own I rode a European 2 stroke and would always end up being waved back by other riders, especially in hilly terrain. My best friend and riding partner rode a Zuke GT750. We both changed to 4stroke engines as we matured; him on a Sportster and me on English & American twins. Did we have fun; hell yeah! I wish I still had any of the bikes today. I especially want an Kawasaki H2 750 engine to build into a custom street racer.
2 Likes
Reply

I have owned a 1971 R75 for 25 years and also own a SOHC CB 750 for many years.  In the early '70's, the Honda was such a more flashy and attractive bike over the stogy and expensive BMW.  The Honda may not have been the first four cylinder production bike, but they did it in a way that changed the motorcycle market.  The bike had overhead cam, a 5 speed and front disc brakes.  The four exhaust pipes were stunning.  Not only that, but the Japanese bikes of the era came in bold colors with lots of chrome.

My R75 has some modifications.  My high mileage bike wore out the transmission, so I replaced the 4 speed with a /6 five speed and higher ratio rear drive.  Those modifications make the bike much nicer to ride.  The Japanese 5 speed snicks into gear with a gentle touch of the toe, while the German transmissions require a disciplined kick to klunk the bike into the next gear.

Despite it all, I greatly prefer the BMW to the Honda.  The German bike is better for longer rides.  It handles better in the turns and (believe it or not ) the front drum brake stops the BMW better than the Honda's disc.  The big brick of an engine in the Honda hinders it's handling and the steel piston in the aluminum caliper needs to be cleaned every year to keep electrolysis from gumming it up.

Both engines are smooth and dependable, but the BMW is a joy to service and maintain.  The BMW gets my vote.

I bought a Honda CX500 Custom new in 1979 and absolutely loved the size, water-cooled shaft drive in a smaller mid size bike. I just bought a 1982 similar version with 12k miles and fell in love all over again. Not the fastest bike, but a reliable Honda that can cruise the countryside with ease!

Are you saying that these bikes are great bikes or just historically interesting?

Their automotive counterparts from that era, and basically the same companies, were;

British... hard to believe would these would ever be trusted to start on command.

Are these bikes better than or different than the cars or the same era? I would think not.

The drawings are all very well done.

I have owned and/or ridden motorcycle from the US, Italy, England, and Austria. I was never into Japanese motorcycles and always turned away from them. The one bike I always wanted to add was a boxer-engined BMW, but I let time slip away from me. I don't know if I'll ever get one now.

Good luck finding a REAL one of those m-cycles.

The SOHC CB750s were actually from 1969~1978. While collectors go nuts for the first "holy grail" sandcast engines, the last couple of years are better choices, especially because of a larger secondary chain and "rubber snubber" to help keep a broken chain from feeding in bunched on the front sprocket and punching a hole in the cast case. Many an early CB750 got sold with a nickle-sized hole hidden behind the sprocket cover, "repaired" with a beer can and some JB Weld. These things are inexpensive and sooooooo much fun to chop.

The first step was usually to destroy all handling and comfort... 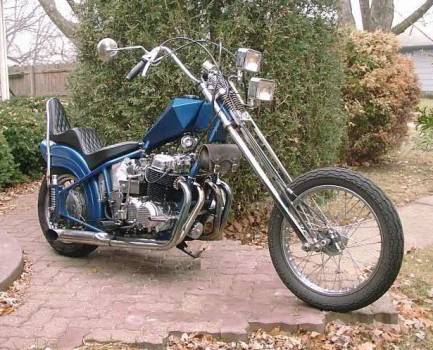 Airheads "over-complicated"? I think not.

The Honda 75 0was a "big" bike in it's heyday. Don't forget all the smaller CB series either. A CB250 or 450 would be great around town bikes, even longer trips with just one rider. Back in the early 90s I was looking for a CB350 for my first commuter bike. I mean real bike -- I was stationed with my family in Okinawa Japan with the USAF and had an 80cc Honda scooter as my "second car". Instead I happened across a pristine (except for rusted through mufflers) CB175 twin. Just needed the carbs cleaned and new tires after sitting in a shed for about 10 years. PO was a college girl who rode it a few months then had it slide out from under her when turning into a gravel driveway. Parked it and never got back on, it was just pushed into dad's shed. He couldn't get it running when cleaning out 10 years later, and sold it cheap enough that I grabbed it. It was a great commuter for one person, not big enough for a 180 pound passenger for anything more than 10-15 minutes on the interstate though. I found a 350 and sold the 175 a bit over a year later, but it was a Suzuki T350 two stroke... which was actually 305cc, but much more power! I then had several Suzy two-strokes, a 76 T500 being the most fun bike I ever had.

It's funny to consider these bikes "mid-size."  Of course they are now, but when new, they were the "big bikes!"  They are all fun to ride.  Like Steve, I have enjoyed a BMW R75/5 for over 20 years.  It is an absolute ball to ride!

What about a Kawasaki KZ 1000 ? They should be around the same price point.

I'd include the Honda CB500 Four.  The 1973 model I owned as a teenager is still going strong today.

Having been envolved in various motorcycle dealerships from the late 70's until I retired a few years ago, I've owned each one of these bikes, sometimes 3 or 4 times over the years as castaways customers didn't want fixed or trade-ins I bought from the sales dept and while they're fine examples, I own and ride 2 other bikes that I enjoy more although they are slightly newer.....my silver and blue 1982 Yamaha XJ650 Seca and my 1999 Kawasaki EJ650 W2....