17 of our favorite American car emblems

Part of the charm of vintage cars lies in tiny aesthetic details that showcase the dedication of their designers. Modern cars may be faster, more reliable, and more likely to sip fuel than to guzzle it, but they often lack the personality of their retro predecessors. Emblems are one way that even run-of-the-mill economy cars were once given a splash of pizzazz—not to mention the high-power, stylish coupes that came packed to the gills (grilles?) with flashy trim.

Here are 17 of our favorite emblems from America's Big Three, from the '50s to today.

This was cool. One of the favorite features on any car I've ever owned was on my '69 Firebird. Though not technically a logo (or is it? Not sure) I loved the marker lights on the rear fenders. They were little Trans-Am birds that were lit up! On the '67 and '68 they were the Pontiac logo that lit up. The '69 is the only year (I think) that had the little bird. It always made me smile when I noticed it.

I loved it when GM had unique marker lights for certain models and brands.  The Olds Rocket logos on 69 Cutlasses really did it for me.

I fondly remember those as well! The GTO had a unique crest/light on the rear as well.

Hmm....Maybe another Hagerty article in the making?

The cute little AMC Gremlin emblem is one of my favorites.

ou forgot about the infamous 5.0

Cool collection! Could easily explode from 17 to 170 and beyond! I like most of these. The Ford V8 in its multiple forms is a timeless emblem and the musclecar stuff is just as sweet as the cars that wore them. I will say though the Z06 emblem could have been a much better effort. It looks cheap and cheesy and for all that went into the actual car, disappointing.

I always liked the "Thunderbird V8" emblem present on the front fenders of the 1956 Ford Fairlanes.   https://www.google.com/search?q=1956+ford+fairlane+fender+emblem&rlz=1C1SQJL_enUS918US918&source=lnm...

The AMX in circle rear of the doors (rear pillar) is neat.  Sorry I can’t show photo currently as it’s stripped for painting.  Also in grill on drivers side.

Definitely need to include the Hudson Hornet Rocket ship, pure 1950s sci-fi and perhaps a swipe at the Olds Rocket 88?

Also I would include the  Red/White/Blue AMX  emblem used on the Javelin AMX.....

Hey, how about amc's , AMX and others

The article refers to 17 favorites of Hagerty, it's not meant to include every emblem ever made.

Our new family car in 1968 was a Chevy Caprice 4-door that had a big-block 427 motor.  Built into the side market light on each front fender was a small rectangular callout of the engine size on many Chevys with silver numbers on a black background.  For some reason, our car had a bright pinkish colored background with the silver 427 numbers.  I never saw another like it.

I like all the emblems shown in this article. My personal favorite though is the chrome bulldog that sits on the hood of Mack trucks.

Always been a Ford guy but how could you leave out the iconic "SS" logo on so many Chevys? Certainly as iconic as the "289 Hi-Po" or Cougar cat.

How can you omit the badge that the "Wide Track" boys snuck a Tempest past the censors that started ALL the fun.  GTO brought speed out of the darkness and gloom of S.E. Michigan and in to the heartland of American Youth!  Delorean said "Go with speed!" and we did.  Could be the single most important logo to emerge in that industry , ever.  Taught ALL the others how to build cars Americans really wanted.   Your fascination with ponies is terribly over-rated.  That's the car from that era that never could find an identity.

Pontiac’s Firebird emblem belongs on this list. Not the “Screaming Chicken” but the small casting on the rear.

what no 1957 Corvette Fuel Injection badge- by many accounts the first time we hit one horsepower per cubic inch! Also the ford 427 badge from the mid 60's both way more important than some shown here

“We love the classic cobra” but you didn’t include it?...color me confused, but I’m a fan of the original.

The '32 Ford "V8" with the stacked design was one of the first harbingers of what lies beneath. And the legendary "HEMI" logo on that '66 Belvedere or Coronet next to you made you think twice before getting up on the converter at the light. But one of my favorites was the "7 Litre" badge on the front fender of a '67 Galaxie because at that time, I had zero idea about what a "litre" was. But that big ol' Ford had seven of 'em!

Road runner anyone? It was just a decal but still.....

At least one more to consider:  The "6.5 LITRE GTO" pentagram badge that was placed on the lower front fenders of the '65 and '66 Goats.  I still recall asking my Dad what a litre (or liter, in English) was.

To many Ford emblems. The Olds 442 emblem is iconic as it told more than engine size. Of course any of the Firebird/Trans Am emblems means instant recognition.

Would have liked to seen the "Turn it on, Wind it up, Blow it out  GTO"

Now owners are removing the letters on their rides I guess because they all look alike and they think you can't tell the difference between a Nissan Sentra and a BMW M5? How about the old Cadillac emblem with the ducks on the shield? The Oldsmobile world emblem on the trunk is pretty futuristic looking. And what is that Dodge triangle called?

How about the famous Bentley wings.  Each wing has a different number of feathers, so others could not copy.  https://www.bentleymotors.com/cn/en/world-of-bentley/the-bentley-story/news/2018-news/centenary-spec...

The Gremlin Logo is still one of my favorites, especially on the gas cap. 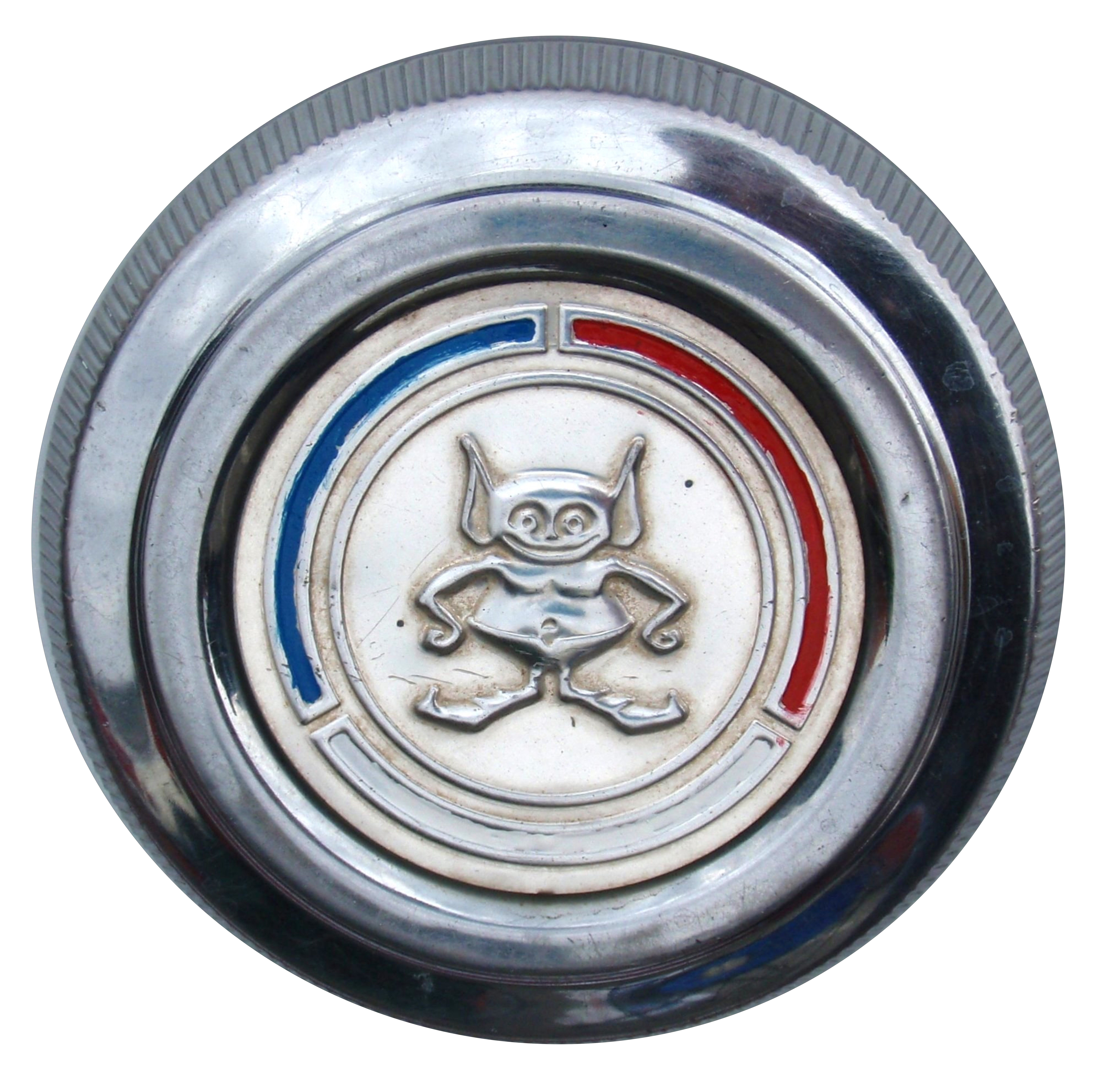 I forgot about those, very kewl

I'd put the Road Runner bird in the list as well, especially the color version: if memory serves, it was the 1st time a cartoon image became an automotive logo. To be honest, I'm biased, but I'm also partial to such emblems as that T-bird shown, GTO, Z28, some Cadillac crests, and some treatments of the Buick tri-shield and Mustang.

Brandan
Hagerty Employee
I don't think I've ever seen a Chevy crossed flag with a cross instead of a Bow Tie.
0 Likes
Reply

Goes2fast
Intermediate Driver
I used to have a book that Chevrolet published in the 60s about their history that said that Louis tore a piece of wallpaper from a Paris hotel room for his bow tie emblem. I'll never forget that because it had an illustration of him doing it.
0 Likes
Reply

What a shame one of the most identifiable ornamentation began in 1949 when Buick introduced “VentiPorts.” Four chrome circular vents were displayed on each of the Roadmaster’s front fenders, with three on the fenders of all other Buicks. The sales brochure noted that VentiPorts helped ventilate the engine compartment. The idea for VentiPorts grew out of a modification Buick styling chief Ned Nickles had added to his own 1948 Roadmaster. Four amber lights were installed on each side of the car’s hood which were wired to the distributor. The lights flashed on and off as each piston fired which was supposed to simulate the flames from the exhaust stack of a fighter airplane. Combined with the bombsight mascot, VentiPorts put the driver at the controls of an imaginary fighter airplane. Buick chief Harlow Curtice was so impressed with this styling feature that he ordered that non-lighting VentiPorts be installed on all 1949 Buicks, with the number of VentiPorts (three or four) corresponding to the relative displacement of the straight-eight engine installed.  Check out this link:   www.jalopnick.com/i-bet-youd-like-to-know-what-those-holes-in-the-sides-o-1818673895

Of the ones you featured I like the Ford I-6 emblem the best. I have only seen it once or twice and those cars were just ordinary used cars when I was a kid.

I still love the Mercury bust used and the AMC Concord "coat of arms" used in 1978.

The AMC Hornet emblem was well done as well.

And the eternal Chrysler "Fratzog", lest we forget

Why am I not surprised, 0 AMC's. The company with the most unique names and emblems.

Excellent article! There will ALWAYS be bickering as to what SHOULD have been in the list! Everyone has there own opinion (and have a right to it) and that is what makes life so enjoyable. Continue.

Of the ones shown I have two favorites. The crossed flags on the 65-66 Corvette and the Z/28 emblem on the Camaro. Although the one pictured above is on a '68 a buddy of mine still owns the '69 Z/28 he bought new in March of 1969. Also LeMans Blue.