10 Canadian car names from back in the day

Over the years, Canada has had its fair share of unique models. You may be peripherally familiar with some of the exclusive machines that came from north of the border: Pontiacs powered by Chevrolet engines, Plymouth-Dodges (a.k.a. “Plodges”), and a dizzying array of Ford derivatives. Canadian tariffs (solved by the 1965 Auto Pact trade agreement) and other business conditions were often the driving force behind these nation-specific vehicles. This intriguing niche of cars often included names with cultural connections, often inspired by national pride in Canadian history or geography ...

You got the Valiant one backwards: In '63 & '64, they were Dart bodies with Valiant noses.

I appreciate your feedback and had it corrected. Due to login problems, I was not able to thank you earlier.

This brings back memories of my first car - a '63 Parisienne with a 283 and 2-spd Powerglide slushbox. Thinking back on it, I learned quite a lot in that car.

Not a  mention of Fargo?

Per the intro of the story: "This intriguing niche of cars often included names with cultural connections, often inspired by national pride in Canadian history or geography." Fargo, AFAIK, is not influenced by Canadian culture.

Very nice, thanks for sharing!

I wonder why they're mostly inspired by Quebec culture?

Although the Valiant is always referred to as a Plymouth, the Plymouth name doesn't appear anywhere on the car, owners manual, brochure or even registration. I used to have a 66 Valiant and it confused Americans because it looked like their Dart rather than the US Valiant.

So, the Chevy II was branded as the Acadian, but was essentially a Chevy Nova.  Then they offered up a trim level on the Acadian called the Canso that was named for a French Canadian community in Nova Scotia.  Ça ne va pas!

Great article, thanks. Another example is the Barracuda, from 1964-1965 it was a Valiant Barracuda in Canada and Plymouth Barracuda in the USA.

A lot of us in the States referred to the first gen as Valiant Barracudas as well as A-Body 'Cudas. I know I did so that they wouldn't get confused with the later E-Body Barracudas from 1970 on.

I believe the Chrysler-Corporation-built Fargo pickup truck was also Canada-only. It was almost indistinguishable from the Dodge pickups of the 1960s.

The Strait of Canso separates Cape Breton from the Nova Scotia mainland.

The Canso was also the name the RCAF Coastal Comand gave to the PBY Flying Boats used to hunt U-Boats and shadow convoys in the North Atlantic during World War 2.

I vacationed on Vancouver Island a few years ago and attend a car show there. Many American cars and when walking up to what I thought was a Chevelle, I saw a 1967 Beaumont. beautifully restored. Seeing the Beaumont badge put me in the Twilight Zone tho. Very nice example.

Well, the author titled it CANADIAN CAR names.  Fargo was used as the truck global export name, but most were sold in Canada at Chrysler/Plymouth dealers (I have a 1950's Fargo Power Wagon brochure from Hawaii; then a territory not a state).  On that same token, no mention of Mercury trucks either.

Thank you. I appreciate the recognition of what the story was about.

You missed the one year only (1959) Dodge Viscount

The Viscount wasn't a name that was uniquely based on Canadian culture.

You forgot the Firefly.

The Firefly's name was not derived from anything Canadian, unlike the cars in this article.

Fascnating.   ALso interesting that most export rhd cars in the 60's came ex Canada - here in South Africa we had Parisiennes, Acadians, and Belmonts not to mention Holdens and rebadged Australian GM cars like the Chev Kommando, el Caminos, SS Chevs (now highly prized).  Am currently drooling over a convertible rhd Pontiac Parisienne 65 model.  28k us equivalent, so not cheap but a rare and wonderful thing here at the southern tip of Africa.

The Valiant in Canada when introduced in 1960 was marketed as a Chrysler, not a Plymouth . It therefore gave the car a higher "pedigree" which carried through , if I'm not mistaken to 1962. Considering it as a separate marque, ads would state "Valiant by Chrysler". Coupled with 1960 being the first year of Chrysler's industry pioneering  "5 Year 50,000 Mile Warranty" the Valiant was promoted as a quality brand at an economical price. The 5 year warranty was in part Chrysler's attempt to shed the bad reputation caused by the rust buckets of the latter half of the 1950s cars ,particularly 1957.

I believe the warranty was introduced several years after 1960.

Thank you for the information on Canadian manufactured "American" cars. These cars were popular in South Africa, Australia and New Zealand before the 1970s when we were part of the Common Wealth. The cars that were imported from Canada enjoyed preferential import tariffs.

Unfortunately the smaller European and Japanese cars took over the car market after the 1960s.

We are currently restoring a 1964 Pontiac Parisienne for the Church of Scientology. When L Ron Hubbard lived in South Africa and Rhodesia (now Zimbabwe) at the time, one of his personal cars was a Parisienne.  The restored Parisienne is destined to be displayed at a museum currently  being built in Harare, Zimbabwe.

We are also restoring a 1965 Ford Mustang Fast back for the museum in Zimbabwe and a Pontiac Super Chief for the Museum in Johannesburg.

The Parisienne does not really refer to a "female from Paris".  The French words for car are voiture and automobile both feminine gender hence La Parisienne.  If your contention that it referred to a female what then would Grand(e) Parisienne mean??

A car influenced by the Grand Prix.

Most "Canadian cars" were a perfect example of pay to play, where American jobs were sent to Canada to pay for the permission to sell other US built cars without fiscal punishment. Actual Canadian designed and built car brands were unaffordable in comparison with US mfg and labor practices, and the entire industry was soon transformed into building factories in Canada to produce US cars with different names and minor details. I wouldn't have an attitude about this except folks would are horrified and angry if/when the Chinese and/or SE Pacific countries did the same.

I'll never forget the ski trip my college buddy and me took to Killington, Vemont in his Pontiac Acadia (aka-Chevette). Piled with skis and equipment, we got searched at the Canadian border. They came up empty (heh-heh)! 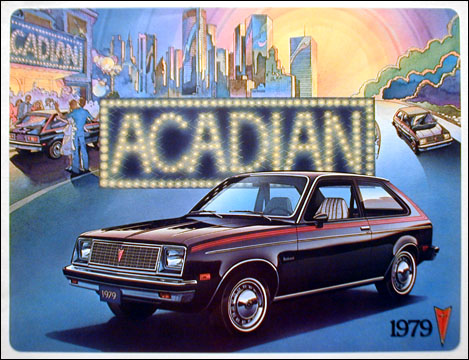 C'mon, man! The best one was left out. It has to be the Buick Lacrosse, renamed Allure for the Canadian market, for a very specific reason (look it up).

Is Allure named for something specific to Canadian culture?

A few more recent examples are the Acura 1.6 EL and 1.7 EL which were basically fully-loaded Civic’s with unique front and rear end treatments. Plus the Chevrolet Orlando and if you get really picky, the Toyota Echo 3 and 5-door hatchbacks circa about 2004.  All sold in Canada and not in the U.S.

I believe there was a Monarch model in 1959 only they called the Sceptre, can you confirm?