This is my first car, a 2000 Toyota Rav4. She's relegated to being just a farm and camping beater now, especially since the exhaust pipe rusted off and the front sub frame cracked. But that said I still love the old girl, even if it doesn't show as much anymore. It's slow, loud, handles like a brick on a slab of butter, but she'll go through two feet of snow, up muddy hills, and glides over gravel like a dream. Sure you have to floor it to get it to accelerate to 25 mph, and sure she's tired, old, and worn out, but she's the best car on the planet in my book. 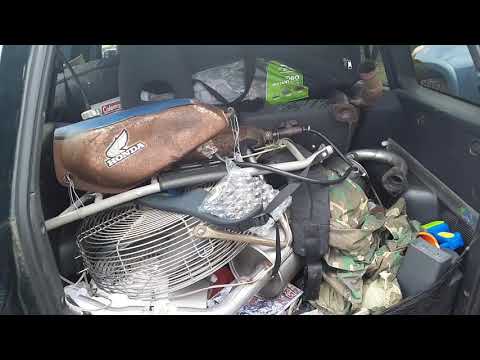 My 2000 Rav4 walk around for 2020 Concours De Le'Mons
youtu.be/jSv75eOQyeE
Enjoy the videos and music you love, upload original content, and share it all with friends, family, and the world on YouTube.
1 Like
Reply
Highlighted

Up for your consideration is my 1979 Mazda RX-7. This car was a Pennsylvania native until about 12 years ago, when the original owner moved to North Carolina and promptly parked the car in a field, where it sat having its soul sucked out for the duration.  I purchased the car from said field, got it running, and took it on the 2020 Retreat From Moscow Lemons Rally.

Mechanically, the car is working perfectly, and is bone stock, with the original unmolested 12a rotary engine never having been out of the car. The body and interior are as they were when I removed it from the field, that is to say, rusty and sun bleached.  But hey, she still braps for days, and doesn't overheat (much), so what more could you ask for?

Interior is very sun damaged, the original color for the lower dash and center console was red (not grey)

From this picture, you almost cant see how terribly rusty it is.

This is probably the worst view of the car

GrumpyOne
New Driver
I Like It!
0 Likes
Reply
Highlighted

Named after a security guard in a post-apocalyptic crossover, my little Miata has earned her cutie mark. Every part of the brake system has been replaced except for the pedal and lines, she's gotten a new top, has been rear ended (hence the colorful panels at the back), and isn't entirely straight, all just like her fictional counterpart.

Also, popup headlights for the win.

Here is one that I'm fairly sure our US friends will not have seen before that comes from the land of the rising sun.

This is my 1974 Datsun 260C wagon, known in Japan as a Cedric but in Australia as the 260C because, as legend has it, the Australian market though 'Cedric' was a bit weird. I tend to agree, Cedric sounds like that weird uncle who gets handsy at Christmas and much like that uncle this car complains a lot.

Used as a farm car from nearly new, it sat in a barn for about 10 years before I picked it up and as evidenced by the steel girders on the front subframe it was used to drive over fences out in the Australian wilds.

It is a fantastic lemon with an underpowered 2.6L (L-series) engine that only has one very asthmatic carburettor which is very unlike its stablemate the 260Z with twin SU's. The rear axle is an agricultural live axle that really gets confused on dirt roads and starts to rock like we're on the high seas, combined with double wish bone front and it's a soft, floaty ride.

Lastly, and unfortunately, I don't have a good photo of either of these feature but there are two redeeming features; firstly the carbon monoxide seats in the rear that are for midgets and definitely not for full-grown adults, but it does officially make it a 7 seater which was pretty cool for 1974 from Japan. The second redeeming feature is the rear passenger side window (left side for those playing along at home) that has a keyhole that when a key is inserted and turns, activates the ancient electric motor and brings the window down. This window was for curb side deliveries and I think inspired by something like the Chev Caprice with the rear electric tail gate, only smaller and not as useful.

Here she is in all her glory! The colour is original but the dents are hard won over years of use out on the farm:

Also, note it has a badge on the back that says 'Wagon'... incase there was any confusion...

She looks good in this photo...

Also a needlessly complex grill, but it was the 70's. You can see the steel girder that (with an extension) was used to push over fences, stumps, cows...

Here's my 1967 Isuzu Bellett 1500 sedan. It came free with an ultra rare 1966 PR90 Bellett GT shell and several crates of grotty, greasy parts. It sat in my front yard for a few months, destined to be broken down into parts; it has a big block 1600cc Chev LUV motor after all (NB: it's a bolt-in swap as the LUV is also an Isuzu product).

However, a sudden need for a second car in the family saw me press it into service. It had sat in a guy's backyard for about a decade, heating up so much in the South Australian summer sun that a pen in the door pocket had melted into a banana-shape. Naturally, it would need a full going over, so I pumped up the tyres and drove it up the street. Aside from the fact a loose baffle kept blocking the exhaust and all four tyres de-beaded, it seemed ok.

One new exhaust and four spare tyres later (I hesitate to say 'new'), and it became my daily driver. I drove it to work, as did my now late wife from time to time, her on-street parking position resulting it in appearing in early Google Streetview images of the area. I was certain the police would take one look at the paint and the rust and give me the old "Yeah, nah," (which in Australia means 'no') and issue it with a defect, but here we are some 13 years later....and it's still going strong.

The paint brings more attention that a restored Mustang (that's not hard), with pin-up girls expertly etched into the flaking paint, appearing as if by religious miracle. The Japanese on the side says "Ginza Province Isuzu Wreckers" after whacking that through Google Translate, then messing with the result in MS WordArt. I had the text created in vinyl, stuck it on, peeled it off again and here's the result.

Aside from the G161 OHV Florian/LUV motor, modifications include a set of rear Bellett springs in the front (an age-old trick to reduce the Bellett's towering-yet-standard front-end height) and a set of 14" Florian wheels wearing original hubbies, although it's worn a few different wheels over the years at the pictures will attest.

It's the best driving car I've got; it just goes and goes, whips traffic, chops snoozy drivers at the lights and the swing-axle independent rear end means it handles like a sports car right up to the point that it doesn't.

I smile every time I drive it, I love it like a child and will be sad when I finally get the old ''Yeah, nah."

Does a soul sucking appliance get a soul if it gets 65 MPG? Does black paint give it the soul of a drift car? Do wheel well fairings make it a spaceship?

1990 ♾ Q45.  Creampuff 74K mile with period correct 16” BBS.  Rear muffler delete, custom hail damage to all flat surfaces leading to the $1000 purchase price.  Nobody knows what it is, but it sure does sound good.