Here is my entry for Concours De Lemons 🍋

1985 Dodge Aries wagon with a 2.2 liter and factory 4 speed.
Spent way more money on it then it was worth to make it road worthy.
It was entered in the 2020 Amelia Island Concours De Lemons as my “Plan A” car. Sadly it couldn’t make the trip so I bought my 1973 Ford Country Sedan wagon instead. A virtual contest makes it easy for this wagon to attend.

https://youtu.be/MhqxDuoBaXc
I decided to make a video of my entry... 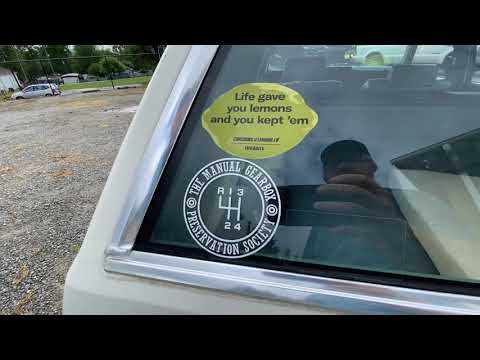 Here's Duff Beer Racing's 1981 Jet Electrica 007. A factory electric conversion of a 1981 Plymouth Horizon TC3, it's been raced in the 24 Hours of LeMons, run in a LeMons Rally, and made it live to the 2020 Amelia Island Concours. We've upgraded it from the GE forklift drivetrain that it came with to a modern 3-phase powertrain with salvaged junkyard BMW i3 batteries. On long trips we tow a 15KW generator behind it on a trailer to keep it charged. Pictures of us having strange and awful adventures with it can be found here: https://www.instagram.com/duffbeerracing/

You want boring? I got boring.

This car made its way to Australia back in 2009 when a mate and I imported some Cadillacs, Lincolns, Mazdas, Datsuns and this.  I would have said it was a stowaway but I liked the slab sidedness of it and the 440 big block kind of won me over. Australia never really saw so many cubic inches in one place, so on the boat it went.

That being said it is still pretty boring and when the time came to sell it was incredibly hard to move! No-one wanted boring, everyone wanted a Mustang. As far as a cruiser goes it had the right credentials; big block, pillarless, four doors and disc brakes plus an exhaust to wake the neighbours but after looking at it everyone mumbled something about wanting a '57 Chev.

Cruising around in Adelaide, South Australia we sure got some looks but talking to people no one had ever seen one or even heard of it. Most locals looked at it and asked in awe 'What is it? It's like a Valiant... only palatial!'

I'm not sure about the US market but here only true Mopar nuts know what it is and eventually, one of these nuts has taken it for a full restoration to take it from a faded lemon back to its former, boring glory!

Behold, a 1966 Chrysler New Yorker Pillarless sedan, in Australia, in all its glory:

Huge, faded and boring. Right down to the hubcaps.

Look at those chops

So pointy in a blunt kinda way...

Yep, that's a face only a mother could love.

Your 1966 Chrysler New Yorker doesn't look boring to me! Impressive that you shipped it to Australia so that a new audience could appreciate mid-'60s American design.

I'm actually in the middle of restoring mine. It's the 1975 Dodge Dart Custom Sedan that my great-grandparents bought new. It later sat in my grandparents garage for most of my childhood and I would play in it every time I visited. When I was 14, it was given to me and we brought it home with only 36k miles on it by 1993 and a factory shine on it's garage kept paint. I learned to drive in the car, and drove it throughout highschool and through grad school.
During this time, I (being a stupid teenager) decided to strip the cars paint and repaint it a number of times using rustoleum before finally taking an autobody class my senior year. I eventually swapped the slant 6 for a "built" 318 and upgraded the torsion bars, control arms, sway bars and performed a disk brake conversion along with replacing the 7 1/4" rear with an 8 1/4".

But as luck would have it... a connecting rod let go 1 month after getting married. Before I had a chance to do anything, I took a job we had to move for, and it was left behind on family property. It's taken me 15 years to finally get it home... unfortunately, I had started another paint strip and it was left in bare primer the whole time... so as you can imagine there's quite a bit of repair work to do from surface rust and where leaves collected and rusted all the way through.

Now I finally have a garage of my own and I don't have to rely on it for daily transport, so I get to take my time and do it properly. I realize it's a 75 4 door (originally slant 6) so it's about the least valuable A-body, but it's that one thing I can't let go of.

It had a couple dings when I first got it, but still shined like new.

After body shop class... But before disk brakes. I do NOT suggest taking a 4 wheel drum car up Pike Peak.

After the engine swap and picked up some wheels from the donar car.

It made it thru the wedding.

The day I finally got it home after 15 years.

Current condition. Thankfully it was a southern car, so the rockers and frame are pretty solid, it's mostly rust around the windshields and trunk lid where it collected leaves.

The eventual plan is something along this line, though likely sticking to a Dart grill (modified an existing 3d model)

That's an awesome project!  I am glad to see you are restoring such an important piece of your past!

That sir is a fine American automobile!  Can you imagine how hard it was to make steel panels that long, look that straight!  Pillarless or 4dr Hardtop as it was called, meant you had a reinforced frame under that mid section and that is one tough car!   Use a gallon size bottle of Colorback to bring back that awesome 60's green.  Throw a roots blower on that 440 and hold one to your hat because that car is gonna fly!

BTW.. there is no such thing as Mopar junk. 😛

Here is my Lemons entry🍋

This is my 1984 Jeep Grand Wagoneer. My buddy pulled it out of a barn in California and sent me a picture of and i fell in love. After he evicted the raccoons and got it running, we drove it from his house in Orland, California to my house in Madison,OH. Surprisingly, it only broke down once on the trip. This wagoneer has a couple rare options such as the automatic chassis oiling system and the burning oil mosquito fogger. My wife and I love this thing so much we drove it to our wedding. And yes, the guy behind wheel photo bombing us is my buddy who pulled it out of the barn in California. Missing lemons this year, hoping to win that ebay gift card so i can buy some more average quality used parts!