This is my 1989 Chevy Silverado Stepside Regency Conversion Pickup. With its wide Centerline wheels and white-out grille, it has a very '80s vibe, so I dubbed it "Way Cool Jr". I bought it from a Copart Auction in August of 2019. I needed a truck, and it looked clean. I figured with a few weekends of work I'd have it on the road. It wasn't listed as running, so I bid accordingly. I had a built small-block Chevy waiting if the engine was junk. There was some rust, but it didn't look terrible. At some point in the past the Regency running boards were removed.

When I got it, it was largely intact, but on closer inspection everything was broken. The engine was seized. The truck was not advertised as being a flood recovery, but there was plenty of hidden flood damage. Even though I'd looked the truck over, the silt looked like normal dusty Oklahoma road use. Tearing down the engine I found mineral crystals in the lifter valley.

The interior:
The interior is mostly 'stock', if you consider a conversion truck 'stock'. I removed the Regency wood pieces, sanded them, and varnished them. The fancy Regency seat was garbage, and not really luxurious, so I replaced it with Pull-A-Part leather seats from a 1994 Cadillac Seville. The Caddy had 84,000 miles, no body damage, and a HUGE rats' nest under the hood. The interior of the car was all Hanta virus and black mold. I powered it up with a jump box, got the seats, the heated seat switches, and as much of the harness as I could cut out. Best of all, when I was cleaning them I found a change purse with a $17 dollars. Seats were on sale, so after taxes I made about two bucks buying the seats. I built seat mounts from 2" square tubing and built storage drawers into them.

Black was not a color offered from the factory, but Dupli-Color vinyl paint is readily available in parts stores. I epoxied as many interior pieces together as I could and shot them black, and it looks nice with the wood bits and tan leather.

Still needs fixing:
Stereo head unit is missing and the wiring is mangled
Windshield has four different cracks in it
Replace tint
The TH700R4 is slipping, but I have a junkyard transmission to swap in
The seats still need wired and junkyard Ford center console installed
Front airdam cracked
Armrests and passenger door switches 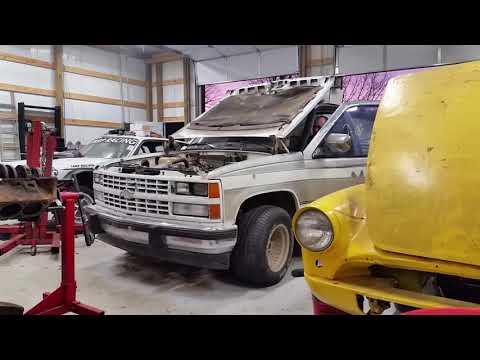 Here’s a pic of judge Alan sampling some bribe juice off the hood of my Vega at CDL Amelia island 2019. I don’t know why I didn’t get a trophy? They even left the bribe on my car.

As a 24 Hours of Lemons judge, let me tell you how not impressed I am with your bribe. 😉

Oh my gosh, that Fleetwood with the longhorns is SO GOOD.

The brownish manual Cimarron still has a special place in my hear—err, fart, for dominating the World Tour of Texas. It's such a good little car. You plebian fools just don't understand the fine sporting luxury of such a magnificent Cadillac.

My 1926 Chevrolet Superior Series K Touring has been found a "barn find" three times. First in 1956 in Chilhowee, Missouri, again in 1980 in Independence, Missouri and finally Kansas City, Missouri in 2017. It has never been dissembled or restored, but runs and drives incredibly well. I use it regularly and folks like to compare it to the Clampett family car, which inspired it's name: Beverly

It was on the cover of the September 2019 Vintage Chevrolet Club of America's magazine and received an Award of Excellence in the Preservation Class at the Dayton Concours d'Elegance in 2019.

More pictures and information can be seen here: https://vccachat.org/ubbthreads.php/topics/402668/all/the-story-of-a-1926-chevrolet-superior-series-...

Even though GM may not want to claim this car, they built it. You may want to move it to the GM class.

Here is one of my lemony fresh front wheel drive GMs from the majestic era that is the late 80s/early 90s. This 88 is complete with rust, bad repaint, crooked quad exhaust and a Supercharged 3800 swap that keeps blowing fuel pump fuses, therefore not running. I own 5 cars currently, 2 of which actually run and drive. Touchscreen works but is intermittent. Enjoy the oddity of the Reatta

My other lemony fresh entry, this 1990 Buick Reatta. I've owned this car since 2007, never driven it, kind of ran, transmission shifted out of park and ran me over once (true story), needs plenty of work. Hopefully one day will have a garage of running Reattas instead of 2 non-running Reattas

I was really looking forward to attending the Detroit show. Here is my Family Vette #2 for your consideration