I don’t know if I have any cars that would make it to Italy, let alone the 2 1/2 hours to Paris, but it sure looks like fun!

I wrenched on these at Pontiac dealer when they were new. Not many actually caught fire

Please allow me to introduce Rusty Boo, my work car. He is not intentionally scary, he’s just a 1991 Buick Century (or Byurit, as one of my uncles used to say); a plain, stalwart FWD A-body produced during GM’s import-fighting campaign. He is sporting the anvil-like 3300 V6 paired with the rubber band 4T60 that is still clinging to life despite 190,000+ miles. The pillow-firm ride is provided by the original springs/struts/shocks and is just the right amount of cloverleaf exit ramp excitement to keep me awake. The forward-thinking door-mounted passive seat belts and comfy mouse-fir upholstery almost keeps me inside the car during speed limit cornering maneuvers.

Please don’t be jealous of Boo’s attractiveness. The ugly rust patina is the fruit of laziness that resulted from a cheapie paint job over the period-correct delaminating GM finish and really adds to Boo’s character. His businesslike steel wheel persona was quite serendipitous when the hub caps decided they didn’t like Boo anymore. Good riddance.

He was purchased as a parts car for another one like him. However, he wasn't quite ready to be an organ donor and received a new lease on life. He departed the junk yard and returned to the road, producing no owner regrets in his blue exhaust wake. Except for when the transmission quit pulling and I poured a bottle of magic elixir in it to revive it. Simple fixes are good.

Thank you for viewing my proud entry into the hallowed realm of LeMons. Boo will be so proud among his peers.

Please don't be jealous?  Humblebrags only make us more jealous of this FINE machine! 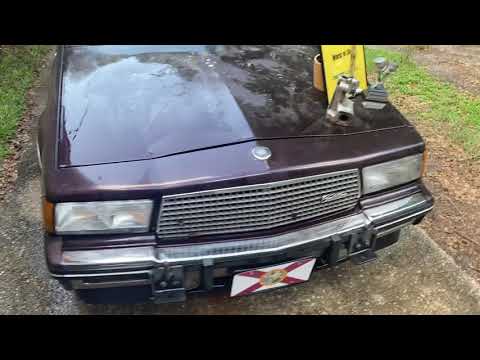 Patina-lover
Pit Crew
I drove one of the first ones in our area released to the public from the Charlotte GM Training Center in 1984. It was, of course, Iron Duke powered and anemic, but WOW did it turn heads! Lipstick on a pig never looked so good.
0 Likes
Reply

Patina-lover
Pit Crew
Dang! It's a shame we're at someone else's mercy when we farm out work that we think someone else can do more efficiently. May your car become more glorious than brand-new!
0 Likes
Reply